Route from the Monastery Aghios Georgios Vrachasiotis to the forest of Akilakes in the mountains above Malia.

The old monastery of Aghios Georgios Vrachasiotis is located in a really wonderful and forest location, Four kilometers beyond Vrahassi as well as five kilometers within the national highway Heraklion – Aghios Nikolaos, shortly after the popular and well-known Sellinari monastery. However, the asphalt road works remain awaiting, the off-road route is usually in a very excellent condition as well as the way is perfect for wandering.
On the subsequent mountain route where you could march on foot or drive by jeep or quad bike, you can reach the Akilakes Forest with amazing views above Malia and the sea.

A couple of centuries later, through the times of the Turkish occupation a number of dramatic incidents occur in the monastery. As usually took place in the time of the Daskalogiannis revolution (1770), around Campi, further up from the monastery some Turkish messengers raped the sister of Gabriel, who was the superior of the monastery at that time. Subsequently, on that day, caused by heavy rainstorms these people chosen to commit overnight at the monastery. Superior Gabriel, who knew in the meantime of his sister’s sexual assault, initially greeted the visitors and lead them to the cheese basements to punish them. Generally based on folklore, the superior, in an effort to take revenge for his sister’s rape, caught them along with the support of other monks and boiled all of them in hot cheese.
Afterwards, in his effort to fade any indications of his activities and get rid of the bodies, he threw them in a large carafe on Kolokyntha mountain. 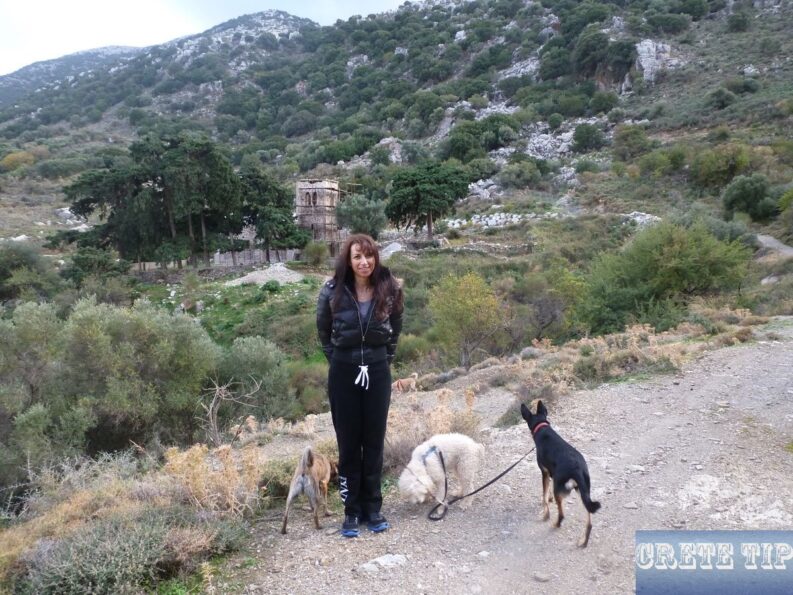 Monastery of Aghios Georgios Vrachasiotis in 2015. 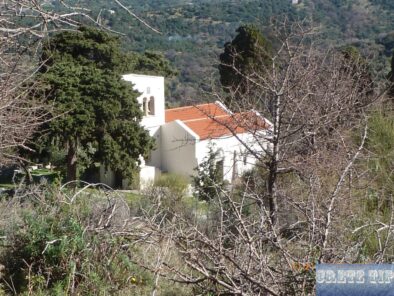 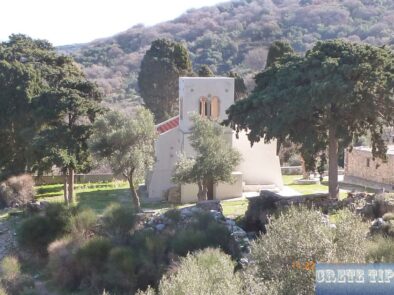 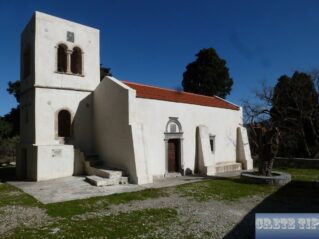 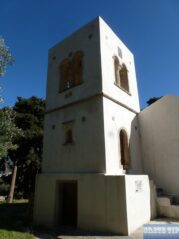 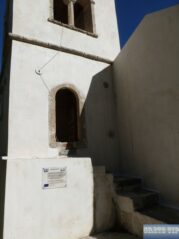 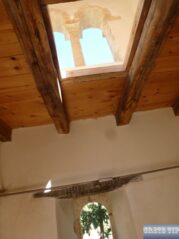 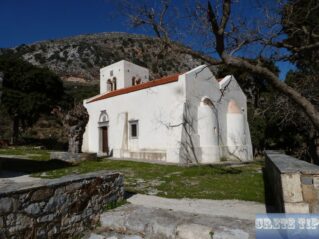 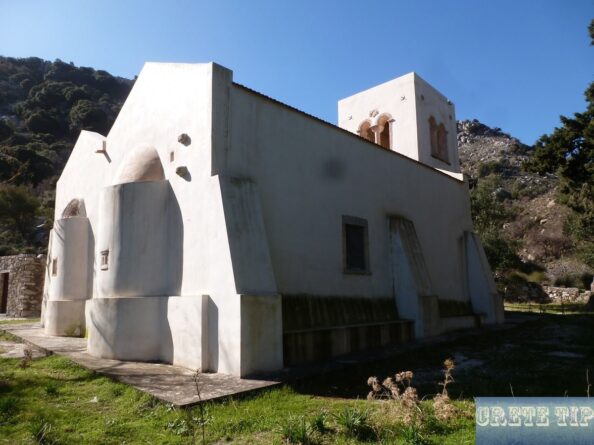 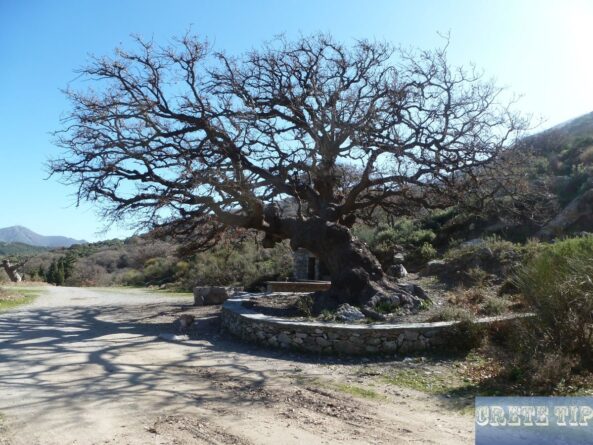 Old tree in front of the Monastery of Aghios Georgios Vrachasiotis

Several Turkish soldiers surrounded the monastery of Aghios Georgios Vrachasiotis in an effort to charge superior Gabriel resulting in a deadly battle. In that fight, the stone section that was designed into the belfry, showing St George killing the lion, received a shot. The hole left by the round is visible nowadays on the image.

The Turks were able to capture superior Gabriel and transferred him to Maydani in Heraklion, to send him hanged. Reported by Mr. Kiriakakis, prior to Gabriel’s execution, the hangman questioned the superior the number of Turks he had murdered. Faking he didn’t notice precisely, Gabriel was able to get the hangman to get closer to him and by focus his attention he strikes and killed him, answering them: ‘I‘ve killed 99 Turks so far and after this 100’.
Superior Gabriel wasn’t able to escape from his execution and was finally hanged on the well-known oak tree of the great castle. Soon after, the Turks demolished all the components of the monastery, besides the church, seized all the plots of land around it and offered them to public auction.

During the subsequent revolutions, the ruins served repeatedly as a place of refuge for freedom fighters and in 1820 another siege took place, when 18 monks were killed.

After the Cretan Revolution the monastery most of his land ownership was returned. The monastery closed permanently in 1909.

Some more new pics from the area: 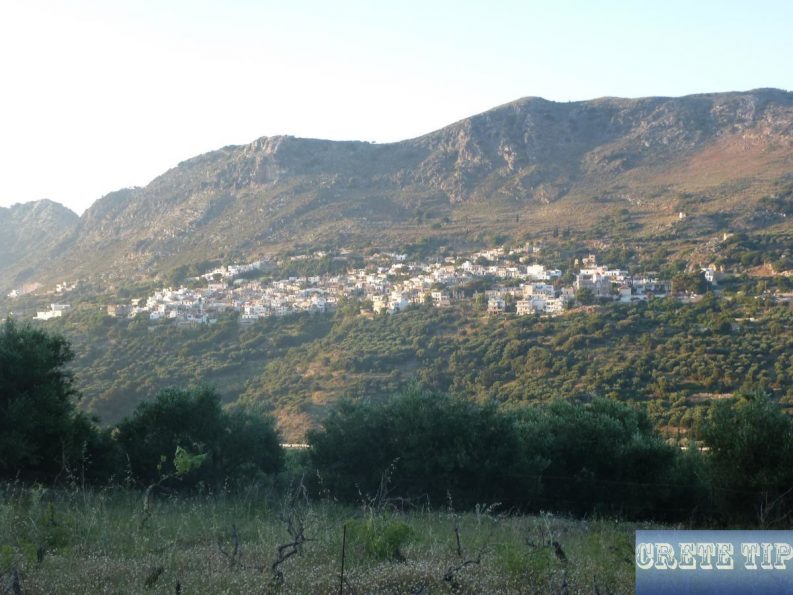 Opposite the village of Vrachasi, near the monastery. 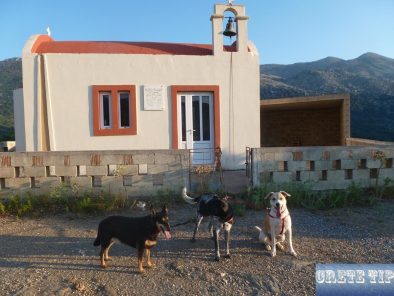 Here are some small chapels. 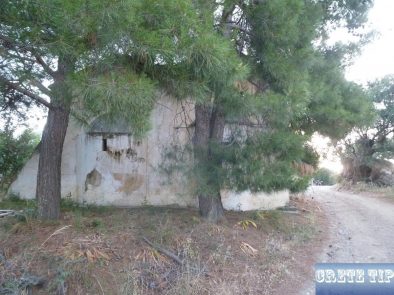 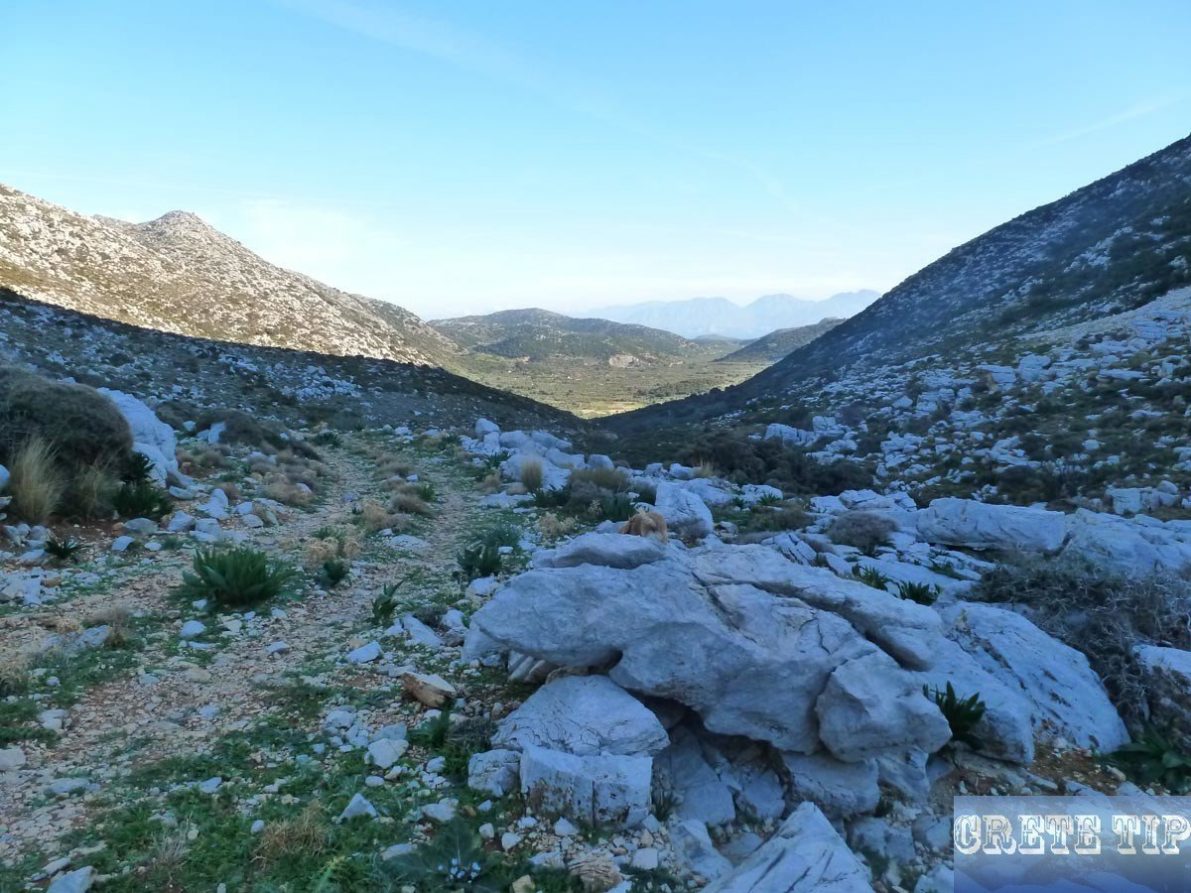 From the Azilakon Forest turn east towards Drasi Park behind Neapoli.

Presently there has been a wonderful attempt these days to recover and rebuild the cells of the monastery. This work has provided being successful since there are festivities on St George’s and St Dimitrios’ Day by the Vrahassi parish to which the church belongs, even though other events for example weddings or christenings be held occasionally inside the church.

Direct behind the monastery of Aghios Georgios Vrachasiotis is a small pass from where you can reach by walking or moving with a suitable vehicle (jeep, quad bike, mountain bike) a beautiful mountain route to the Akilakes forest with great views above Malia and the sea.

Pictures from Monastery of Aghios Georgios Vrachasiotis and the way to the Akilakes Forest: 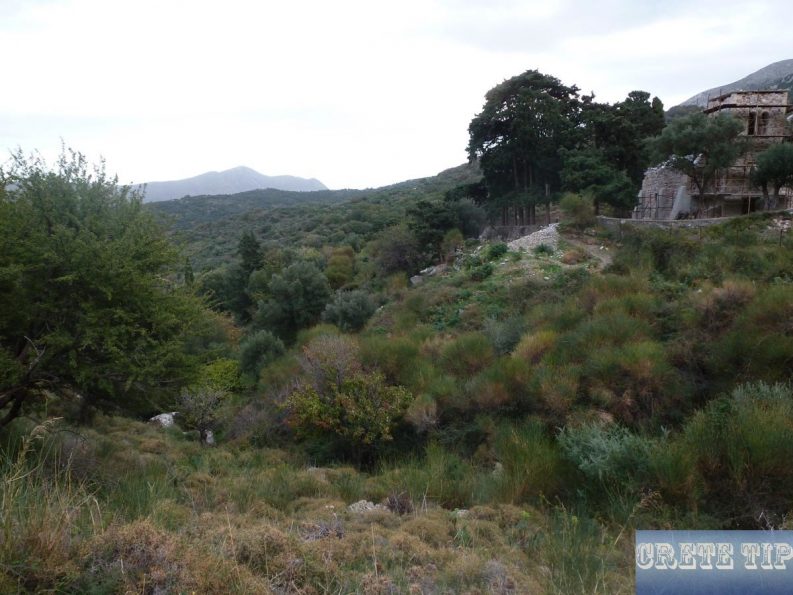 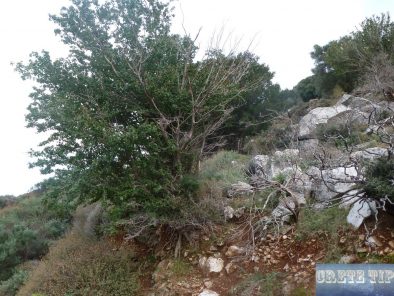 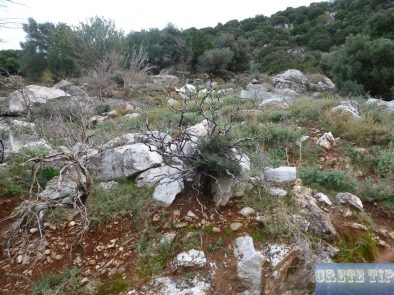 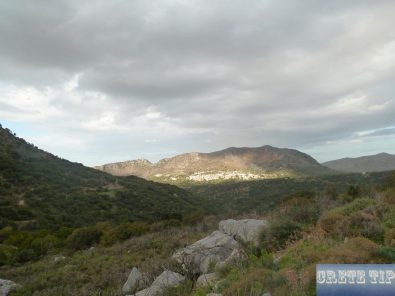 View to Vrahassi from the monastery. 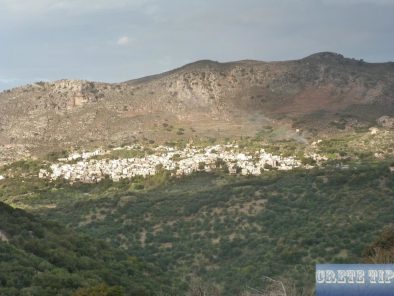 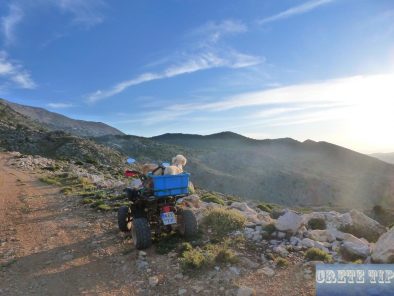 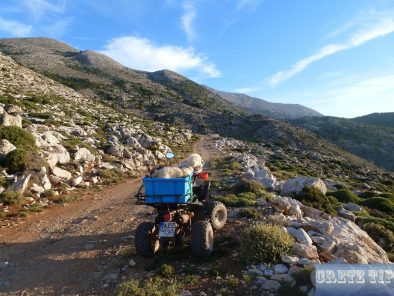 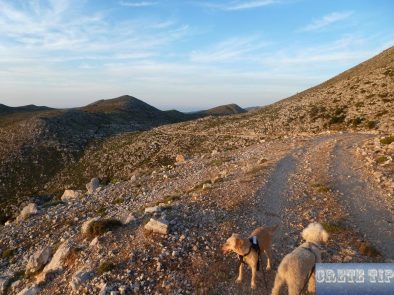 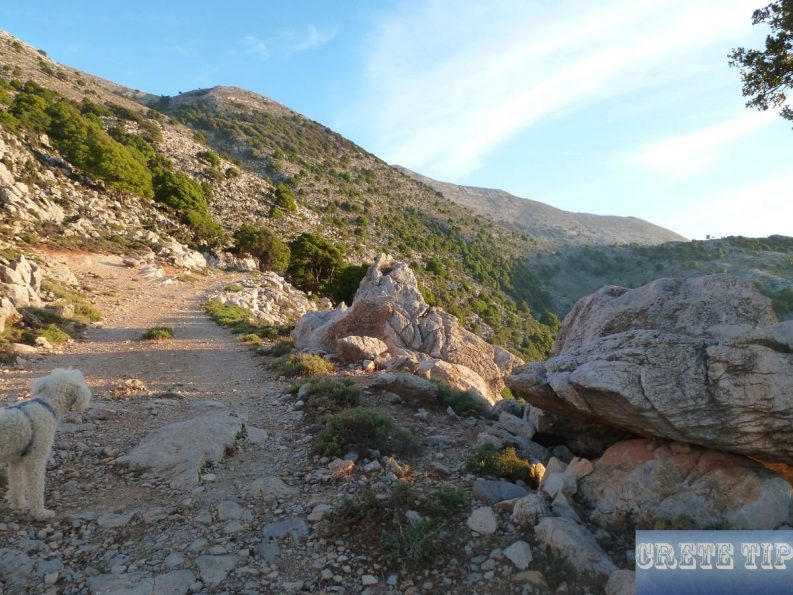 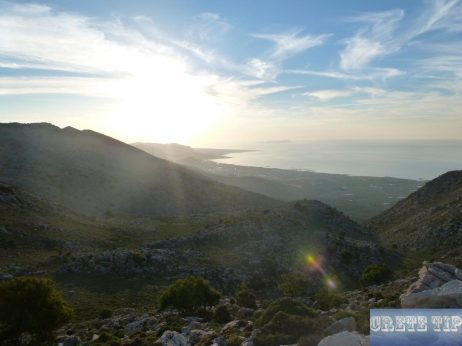 View above Malia in direction of Hersonisou. 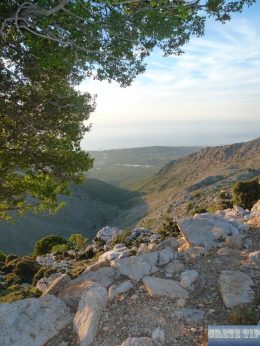 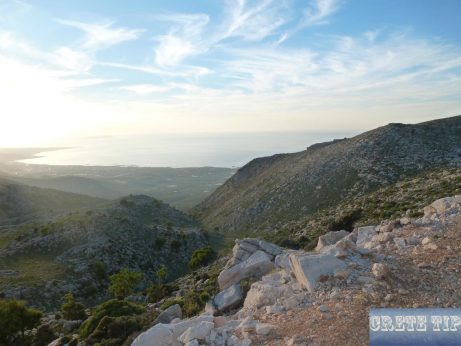 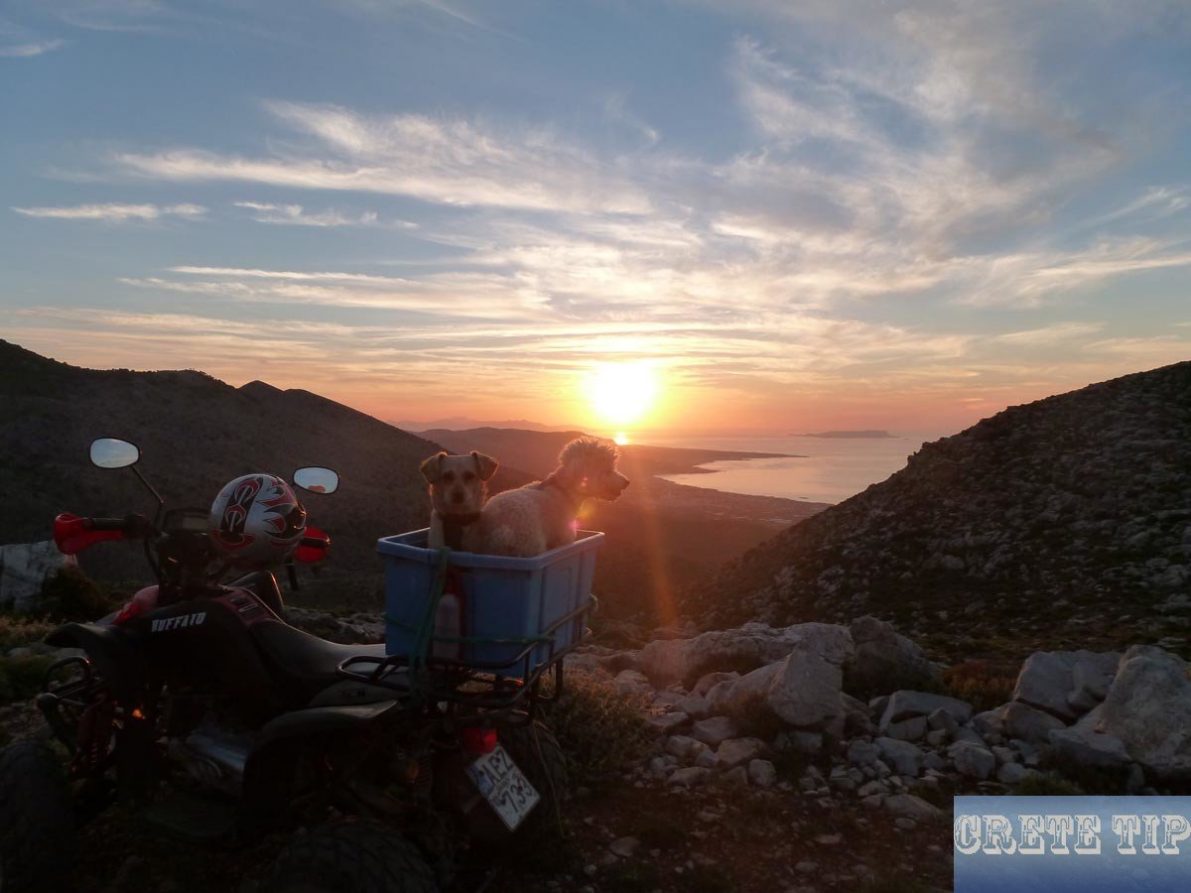 Directions to Monastery A G Vrachasiotis

(8988)
£5.85
Discover NESCAFÉ Dolce Gusto Café Au lait Decaffeinated, our classic coffee pod Café Au lait in a decaffeinated version! So whether it's late in the evening or you just fancy a decaffeinated coffee, Café Au lait Decaffeinated will delight you with it... read more
(as of March 2, 2021 - More infoProduct prices and availability are accurate as of the date/time indicated and are subject to change. Any price and availability information displayed on [relevant Amazon Site(s), as applicable] at the time of purchase will apply to the purchase of this product.)

The Boy, The Mole, The Fox and The Horse

(55814)
(as of March 1, 2021 - More infoProduct prices and availability are accurate as of the date/time indicated and are subject to change. Any price and availability information displayed on [relevant Amazon Site(s), as applicable] at the time of purchase will apply to the purchase of this product.)

(4031)
£5.59
HIGH5 ZERO hydration tablet is a refreshing sugar free electrolyte drink with zero caloriesthat makes it easy to stay hydrated throughout the day. HIGH5 ZERO hydration tablets contain precise levels of key electrolytes, sodium and magnesium, to meet ... read more
(as of February 28, 2021 - More infoProduct prices and availability are accurate as of the date/time indicated and are subject to change. Any price and availability information displayed on [relevant Amazon Site(s), as applicable] at the time of purchase will apply to the purchase of this product.)