With the division of the Roman Empire at the end of the fourth century, Crete became part of the Eastern Roman Empire. The island developed further and churches were built everywhere. The Byzantine rule led to a suffocating rigid society, which was hierarchical and bureaucratic to the extreme.

The central geographical location of Crete played an important role for the Byzantine Empire, as trade in the Mediterranean was conducted on the sea route from Byzantium via Crete to Egypt and on to Africa. At that time Crete was an independent province ruled by a Byzantine general.

At the beginning of this period Christianity spread all over the island and many large churches were built. In the beginning, the Bishop of Crete was under the spiritual authority of the Pope in Rome, but from the 8th century he was subject to the Patriarchate of Constantinople.
Only traces of the early churches remain, mainly the mosaic flours. Only in Gortys there are more remains, like the basilica of Aghios Titos.

Arabs from North Africa came to operate in the Eastern Mediterranean area in the 7th century and limited the role of Crete with their constant pirate attacks. Such an attack in the years 672-673 A.D. had destructive consequences for the big cities of Crete.

The Saracen Arabs, the pirates of the western Mediterranean, who had been expelled from Spain and then Alexandria, decided to take permanent possession of the island after a temporary invasion by Abu Ka’ab in 823.

In the year 824 they landed at the north coast of Crete in the province Viannou. The conquest of Crete was accompanied by looting, acts of violence, the destruction of cities and Christian churches and the desire to convert the inhabitants to Islam. The provincial capital Gortys was razed to the ground after a siege.
However, the Arabs could not change the religious and ethnic consciousness of the inhabitants. Thus, the island sank into a long darkness of slavery and many people fled or withdrew into the mountains.
The conquerors fortified the fortresses at Megalo Kastro, around which they dug a large ditch (‘Khandak’). During the years of Arab rule, Khandak – today’s Heraklion – had the reputation of being the largest slave market in the East. There an undreamt-of wealth was accumulated by pirate attacks, raids on the Greek mainland and other islands as well as the slave trade.

The loss of Crete was a heavy blow to the Byzantine Empire and the reconquest of the island was now the main objective. After unsuccessful attempts in the years 825, 826, 828 and 902 A.D., Nikiforas Fokas, the future Byzantine emperor, succeeded in 960 A.D. with a large army and fleet to land first on the Peninsula of Spinalonga and then on the coast of Almyros near Heraklion.
Until 961 B.C. he recaptured Crete after he had conquered Khandak in a bloody siege, during which he had the heads of his prisoners hurled over the city walls with catapults.

After the reconquest of the devastated island, the Byzantines tried in every possible way to heal the wounds and remove all traces of the Arab occupation of Crete. They brought in new colonists from other areas, and many of the soldiers of Nikiforas Fokas also settled on the island to strengthen the Christian population. The churches became very active, founded monasteries, built new churches and preached extensively to improve the level of education and Christian awareness of the people.

This was followed by a period of peace in which public and private life was gradually adapted to the Byzantine model. In 1082 A.D. Emperor Alexis I Comnenus sent new, permanent colonists under the direction of his son Issac with 12 Archontopouloi (aristocrats) from the great Byzantine families of Phocas, Gavalas, Vlastos and others, who created the basis for a new Byzantine-Cretan nobility.
These new Cretan noble families then always played a leading role in all important events, rebellions and struggles for freedom of the Cretan people in the following ages.

It is very ironic to mention that the end of Byzantine rule over Crete was not by the Arabs, but by the Christian crusaders. During the Fourth Crusade the Venetians managed to divert it to Constantinople and the city was plundered and burned. The leader of the crusaders, Prince Boniface of Montferrat, was given Crete.

After the Crusaders conquered Constantinople in 1204, Crete was handed over to Boniface Montferrat, who sold it to the Venetians. For a short time Genoa competed with Venice and under E Pescatore and with local supporters, the Genoese succeeded in occupying part of Crete and building fourteen fortresses at strategic locations. After a long struggle that lasted until 1212, the Venetians finally became the only rulers of the island and a long and dark period of oppression began on Crete that lasted until 1669.

In order to secure the new acquisition, the Venetians settled many noble families and 10,000 colonists from the city of Venice itself on the island. The highest political authority lay in the hands of the Duke with his two advisers, while the commander of the garrison was the military administrator in Khandak. The Venetians introduced a comprehensive feudal system based on the Western model, which radically changed Cretan society and divided the inhabitants into four classes. The highest class were the Venetian nobles and their descendants, followed by the Cretan nobles, the bourgeoisie and the simple rural inhabitants of the villages.

The strong oppression, the high taxes, the arrogance, the forced labor and the lack of political and religious freedom led to constant rebellions of social or ethnic origin. It mentions 27 revolts of varying intensity over a period of about two centuries. The leaders of the great rebellions were the heads of the noble families of Byzantine origin. However, the Genoese also tried again and again to gain a foothold on the island with their support.

The Roman Church replaced the Orthodox Church as the ‘official’ religion, but local priests and monasteries resisted this new order and already at this early stage they became the centers of resistance to foreign rule in Crete.
Nevertheless, the Middle Ages were probably the most outstanding period in the island’s history of trade when grain, wine, oil and salads were shipped from busy ports for export. The island’s hills and mountains were also cleared to obtain the wood needed for the extensive shipbuilding.

After the fall of Constantinople to the Turks in 1453, Crete saw a spectacular renaissance due to the strong influx of refugees from the East. After 1500 the feudal system began to disintegrate and the economic and political conditions changed. The Orthodox Church regained some of its power and built churches and monasteries that became the germ cells of spiritual development.
The Greek language was officially recognized and there was a permanent mixing of the population, which led to a Hellenization of the Venetians and the creation of a new Venetian-Cretan society with a progressive bourgeoisie. This society was ready to accept the new Renaissance influences from Europe on the basis of the Byzantine tradition.

Many Cretans studied at European universities and distinguished themselves, while a remarkable intellectual and artistic movement emerged on the island. The cities were adorned with fabulous monuments.
But it was the growing external threat that created the most enduring Venetian monuments, the fortresses and city walls.

Venice’s bastions on the mainland in the eastern Mediterranean were all lost along with Constantinople and in 1573 Cyprus was conquered by the Ottomans. This put Crete practically in the first line of the front.
Larger attacks by pirates were already widespread and in 1538 Barbarossa had already destroyed Rethymno and almost conquered Chania. In the 1560s there were further attacks by Turkish pirates and on the whole island the defenses of the cities were strengthened and the fortress islands, which secured the sea routes, were repaired and restored.

In the course of the seventeenth century, however, Venice itself was in decline. The trade in the Mediterranean was now in the shadow of that of the ‘New World’, which was dominated by Spain, England and the Dutch.
Finally, in 1645 an attack on an Ottoman ship convoy provided the pretext for a Turkish large-scale attack on Crete. In 1645 Yusuf Pasha landed with numerous troops west of Chania. After a two-month siege and 40,000 casualties under his soldiers he conquered the city and in 1646 Rethymno and most of the fortresses of the island quickly followed.

Until 1648, the Turks controlled the entire island, except for Heraklion. However, this city with its massive defenses had to be besieged for 22 years because it was supplied across the sea and received at least moral support from much of Europe.
However, the end was inevitable and there was no hurry from a Turkish point of view as they were already controlling the entire production of the island, they were well supplied, and they even enjoyed some local support. The Turks had loosened the Venetian shackles and allowed, for example, the Orthodox bishops to return to Crete.

By 1669 the city was virtually bled to death and in a final attempt the Pope succeeded in persuading the French to send a small army. After a few fruitless missions with heavy losses, the French withdrew after a dispute over the supreme command.

On September 5th 1669 Iraklion had to surrender and the Venetians controlled only the three fortress islands Spinalonga, Souda and Gramvousa. These remained in place until the peace treaty of 1715, when they were finally handed over to the Turks. 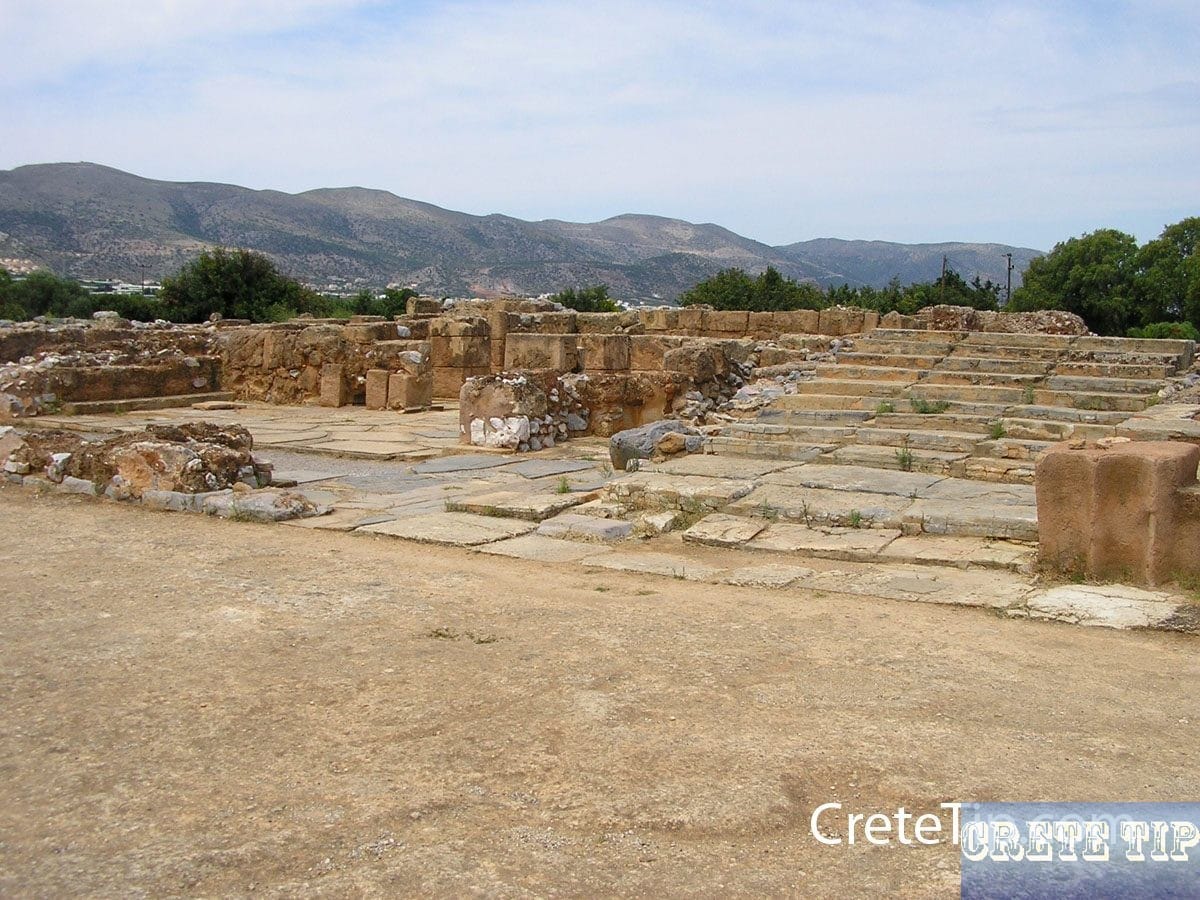