The wild and untapped Agios Ioannis peninsula. The triangular peninsula north of Neapoli and Aghios Nikolaos, east of Milatos and northwest from Elounda is surprisingly wild and not very crowded.

The triangular peninsula of Aghios Ioannis – north of Aghios Nikolaos and inland from Elounda – is surprisingly wild and not very crowded. Narrow streets are leading along secluded agricultural hamlets and small villages.

The section of the main national road from Heraklion, which runs from Malia via Neapoli to Aghios Nikolaos, marks the southern boundary of the peninsula of Aghios Ioannis.

If one follows the national main road, one first reach the gorge of Sellinari, where the travelers traditionally stop and pray to Saint George for a safe passage. This impressive road, which has been built across many obstacles, leads past the administrative capital of Neapoli and then reaches Aghios Nikolaos, where spectacularly the Gulf of Mirabello in front will be visible.

From Neapoli directly to Elounda: If one is not in a hurry, one can also use the small streets that lead over the Aghions Ioannis peninsula. They offer a great alternative to the usual routes to Elounda or to the Lasithi Plateau and are even shorter.

At Neapoli leave the highway and follow the signs to the ‘Amazonas Park’, but then turn down right to the archaeological site of Driros (but do not turn right at the next, shortly following diversion, instead follow to the left) towards Kastelli.
Alternatively one could go directly through Neapoli to the next small village Nikithianos, where one turn left and drives through an underpass of the highway across serpentine to Kastelli. From there continue to Elounda, which is signed.

Although there is not much to see next to the magnificent landscape – except for wonderful views of the Gulf of Mirabello and welcoming tavernas and coffees in the larger villages.

Coming from the west of Malia one start at Milatos with a long and steep ascent to peninsular of Aghios Ioannis.

From Elounda the steep, narrow road winds over Pano Elounda and Pines (picture right) towards Fourni and Kastelli and meets the highway at Neapoli.

Plaka, about 3 miles (5 km) north of Elounda, lies directly opposite the Fortress of Spinalonga and was once the main supply point on the mainland for the leprosy colony.
Boats still carry the short trip today, but they are now transporting tourists.

The previously more or less dilapidated place has become quite chique since the establishment of the not yet to be overlooked luxury hotel. Many new houses and villas have been built, mostly inhabited by foreign owners.

Plaka is still an attractive, quiet place with a few excellent and well-known tavernas in front of the crystal clear sea.
The beach, however, consists of large, little comfortable pebbles and also a strong east wind can blow through the mouth of the bay between the mainland and the Spinalonga peninsula.

Beyond Plaka begins the other, wild and untapped world of the Aghios Ioannis peninsula. The road winds along the coast to Vrouhas.

Here and in the surroundings there are still many of the old, traditional stone windmills, which are mostly decayed.
Its successors are located in the large, new wind farm in the north-east of the peninsula, from where one have a wonderful view over the sea and the Gulf of Mirabello.

To the wind park one drives shortly before Vrouhas on a mostly better dirt road to the right (the wind park is signposted) and one can drive until the north-eastern tip of the Aghios Ioannis peninsula to a small, white chapel near the cliffs above the sea.
There are also some kind of dirt road from Plaka (turn right behind the pebbles beach), which winds up along the coast to the wind farm. This route is also suitable for hikes or tours with mountain bike or quad bikes.

Pictures from the northeast tip of the peninsula: 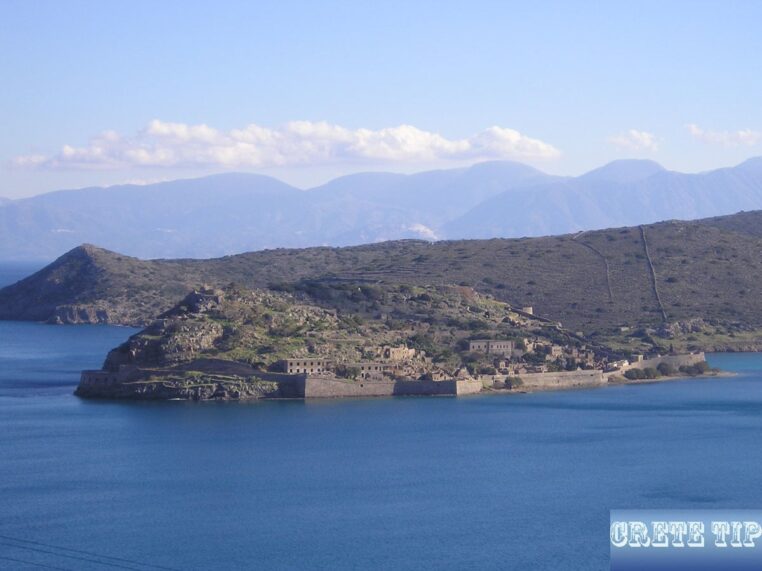 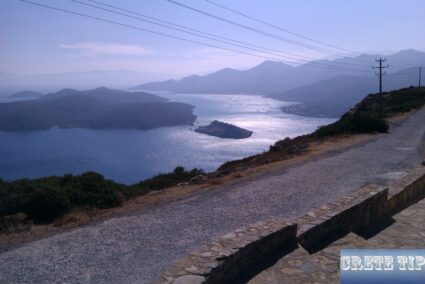 Fortress of Spinalonga in the Elounda Bay on the way to the wind farm. 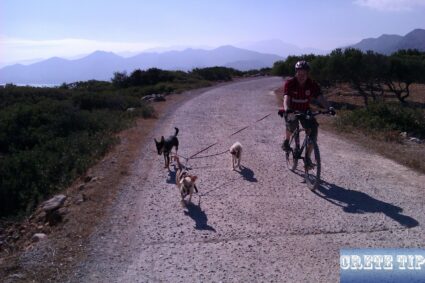 The route is also excellent for bicycle tours, as there is hardly any traffic. 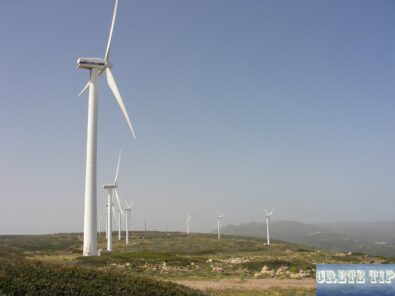 At the wind farm. 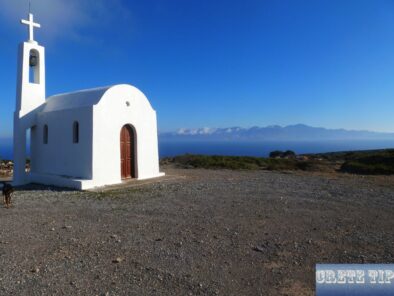 The small Chapel at the northeast tip of the peninsula. 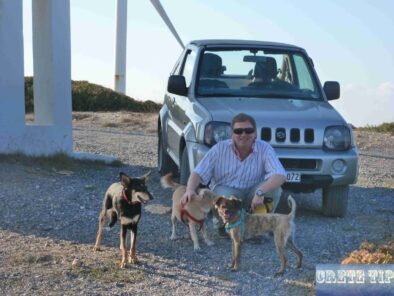 Excursion to the chapel for walking. 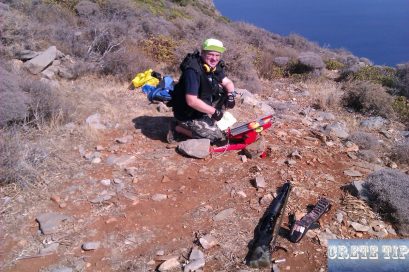 The place is from September to the end of February hunting area and therefore well suited for shooting. 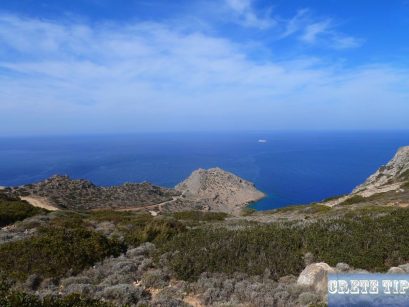 View of the northeast end. The road down was built to bring pinwheels by ship and is closed. 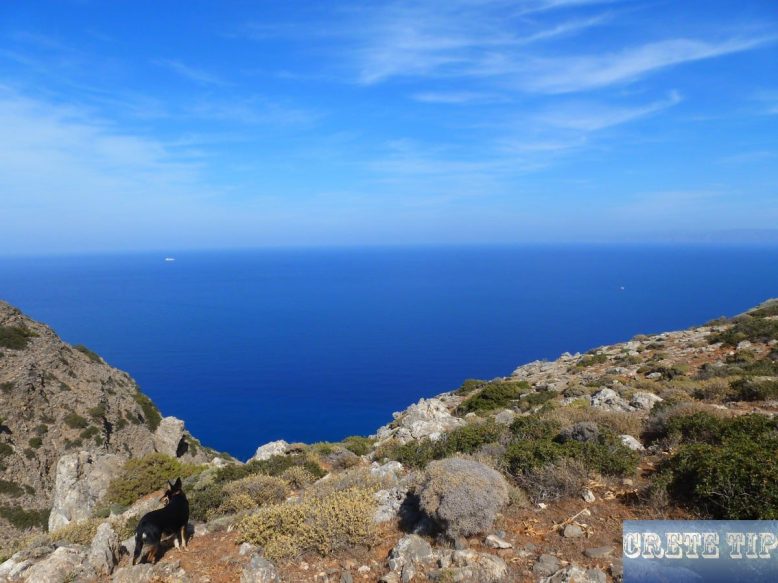 View from the northeast corner to the sea.

On the route from Vrouhas to Skinais, a narrow road leads steeply down the coast, where some isolated beaches with pebbles, small pensions and seasonal tavernas are located on a rugged, rocky coastal section.
About a 3/4 mile to the west as the crow flies, a steep, paved dirt road leads to the chapel of Moni Agios Andrea, just above the sea, where there is also another stretch of beach. 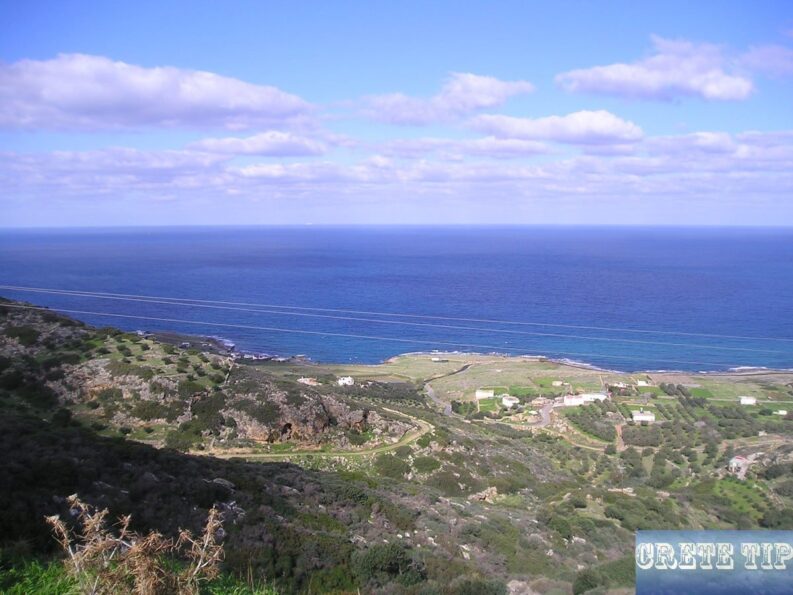 View down to the coast. 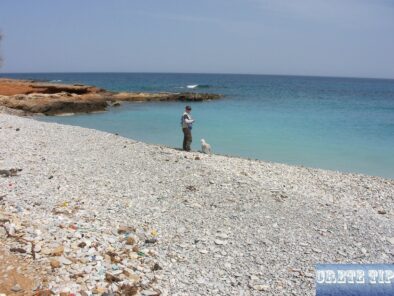 On a pebble beach 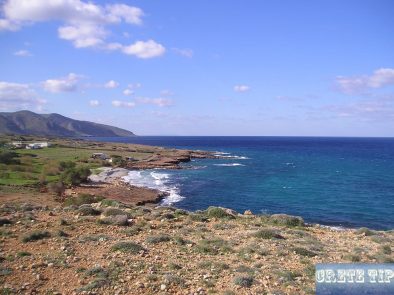 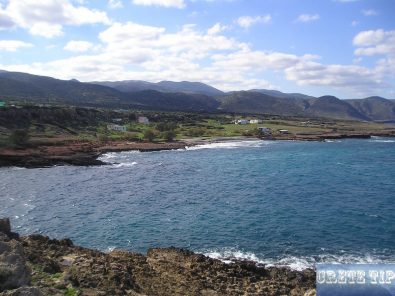 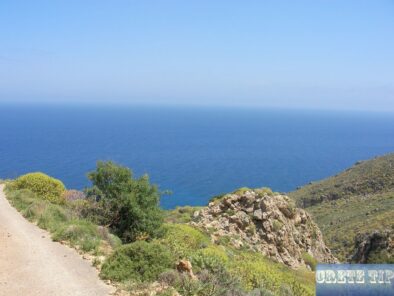 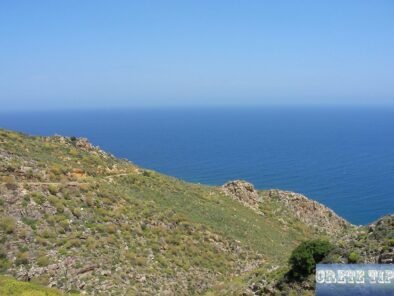 Coast near the Moni Aghios Andrea Chapel with path down to the sea. 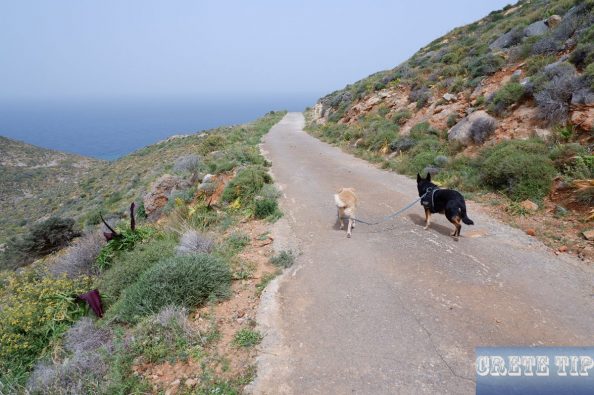 The path down to the Moni Aghios Andrea Chapel, located further west. 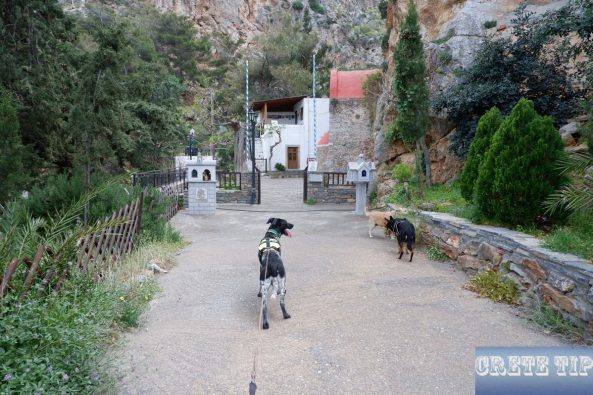 Further inland and just behind Skinias, a well-paved road leads to the lonely monastery of Moni Aretiou, which is surrounded by cypresses and cedars and looks like a fortress from the 16th century.
Recently restored, it often appears as completely deserted, but some monks have stayed behind and the gate and church Agia Triadha are usually open. 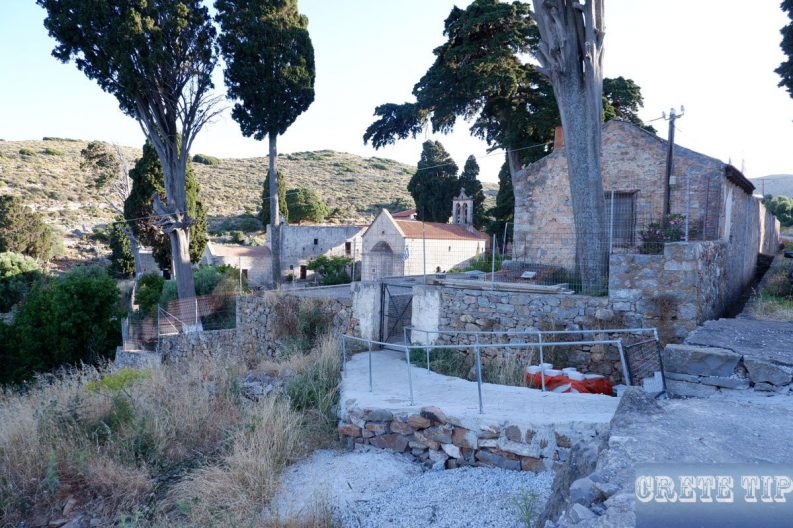 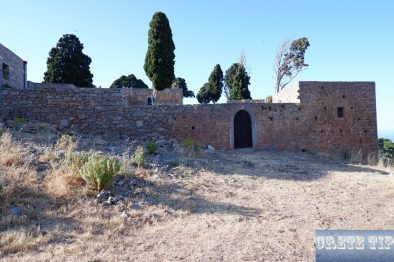 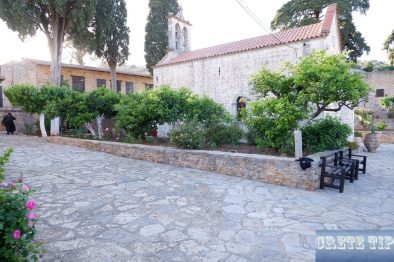 From there, an asphalted road, which winds at first over barren mountain peaks, leads to next but one village of Dories, where the church of Agios Konstantinos houses an icon of the Panayia (Virgin) from the 14th century, the oldest known on Crete.
The church is located near the village center on a small path from the main road (marked by a small monument in the form of a church). The creme-brown-painted house next door belongs to the Papas, which are available to open the church to visitors.

In the direction to Neapoli, one pass the Amazon Park – an animal park (entrance fee: 10 Euros per person, group reductions) as well as the old Doric ruins mountain city of Driros.

Road maps of Crete, which in the best case are not always reliable, do not appear to be particularly helpful on the peninsula. The most obvious, however, is that there is no road which runs completely along the coast from the west to the east, or at least some sort of dirt road, but which is nevertheless recorded on some maps.
It is best to follow the signs and paved roads and one will finally reach the destination.

It is also advisable not to exaggerate with remote explorations, since the police are rarely seen in this area, and local gamekeepers have already reported that parked vehicles of hunters from the city were perforated with shotguns after their return from the hunt trip. Additional, the one or other illegal cannabis field is supposed to be hidden here.

Video from the Aghios Ioannis Peninsula

Duration: 1:56 min with views of Spinalonga and Elounda Bay, wind farm and coast and wilderness.

Pictures of the coast and the hinterland: 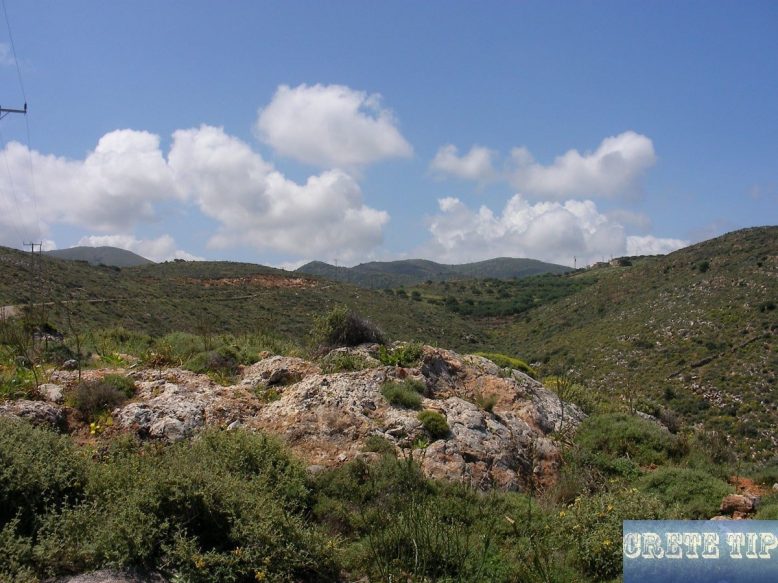 In the hinterland of the peninsula. 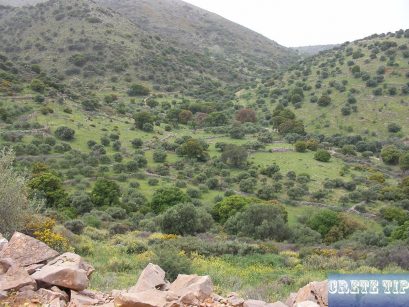 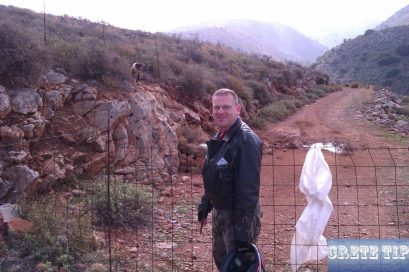 Directions to the beach on the north coast

(4654)
£19.99
WARM BLANKET AS SEEN ON TV: The softness of a blanket with the fit an oversized hoodie is here. This wearable blanket pullover keeps you warm & cozy while you lounge at home, watch TV, play video games, work on your laptop, camp, attend a sporting ev... read more
(as of October 15, 2021 14:44 GMT +03:00 - More infoProduct prices and availability are accurate as of the date/time indicated and are subject to change. Any price and availability information displayed on [relevant Amazon Site(s), as applicable] at the time of purchase will apply to the purchase of this product.)

(225537)
£45.90 £23.11
Ideal for Android smartphones and tablets, and action cameras, and drones Up to 160MB/s read and 90MB/s write speeds for fast shooting and transfers. Operating temperature : -25ºC to 85ºC Rated A2 for faster loading and in-app performance 4K UHD-read... read more
(as of October 15, 2021 14:42 GMT +03:00 - More infoProduct prices and availability are accurate as of the date/time indicated and are subject to change. Any price and availability information displayed on [relevant Amazon Site(s), as applicable] at the time of purchase will apply to the purchase of this product.)

(50382)
£16.99
Suitable for instax SQUARE SQ6, SQ10, and SQ20 cameras and SHARE SP-3 printers Film size 86 mm x 72 mm, image size 62 mm x 62mm Distinct film tehcnology, delivers high quality instant images ISO 800 film with White Border
(as of October 15, 2021 14:42 GMT +03:00 - More infoProduct prices and availability are accurate as of the date/time indicated and are subject to change. Any price and availability information displayed on [relevant Amazon Site(s), as applicable] at the time of purchase will apply to the purchase of this product.) 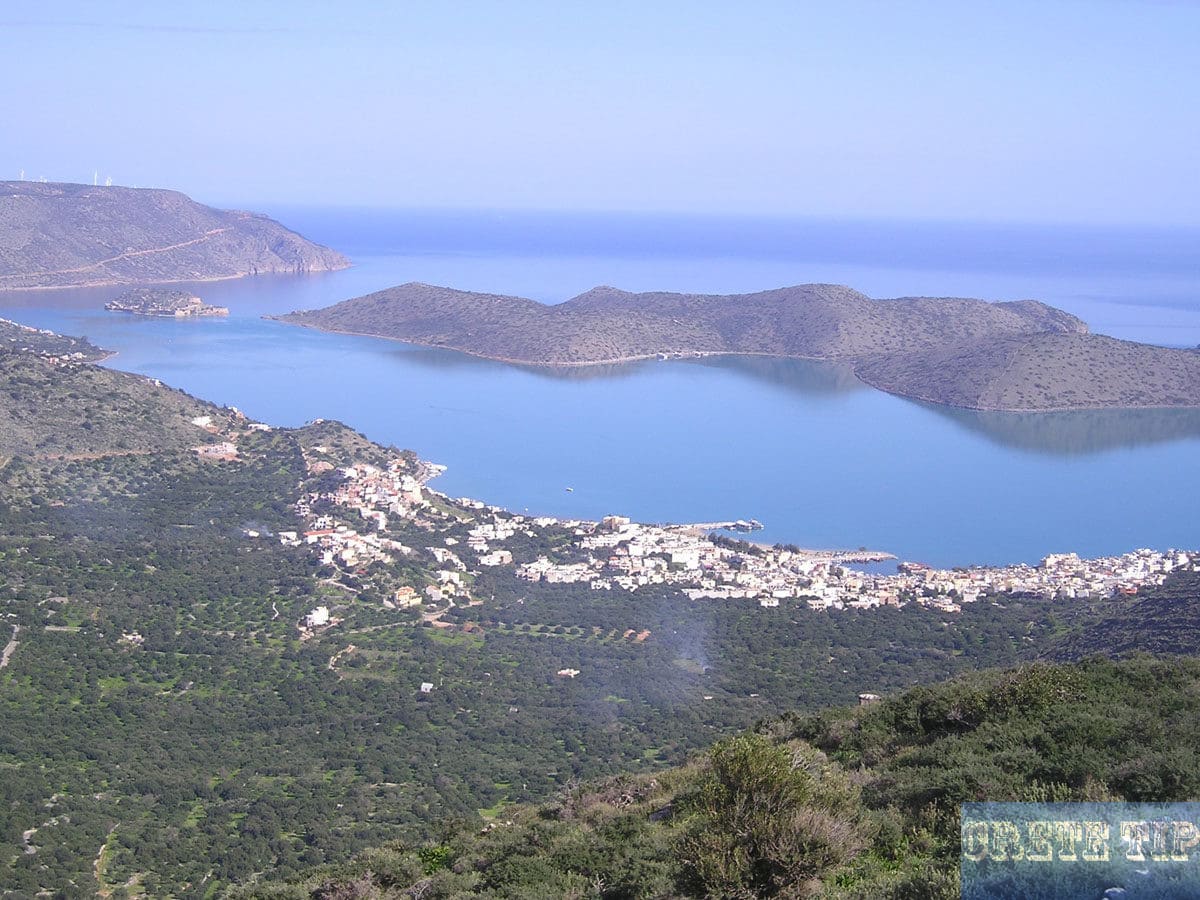 Walks, hiking and swimming at Kolikitha and other sandy beaches on the peninsula of Spinalonga in front of Elounda and the fortress island. In general,… 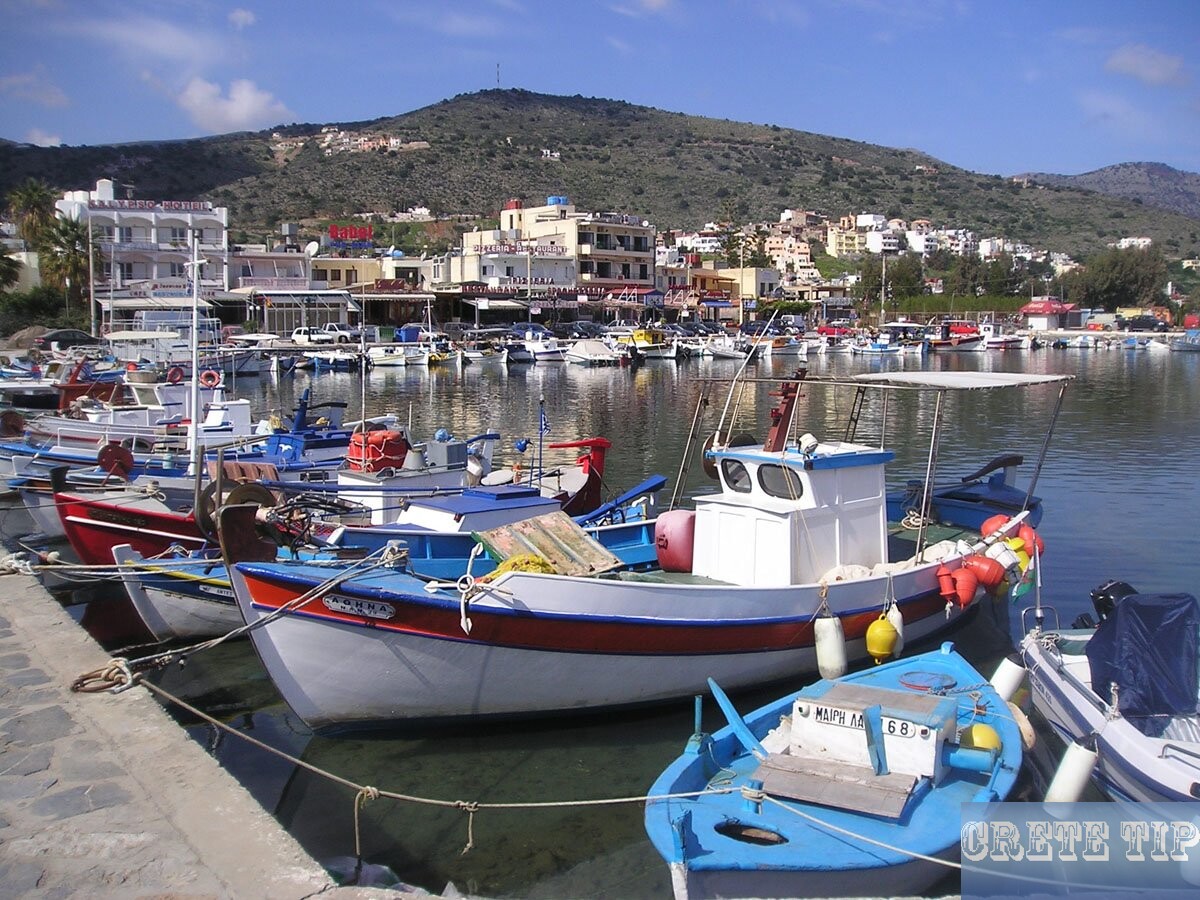 Elounda is situated on the north-eastern coast of Crete, and nestles between the high rugged mountains and the clear blue sea close to the city… 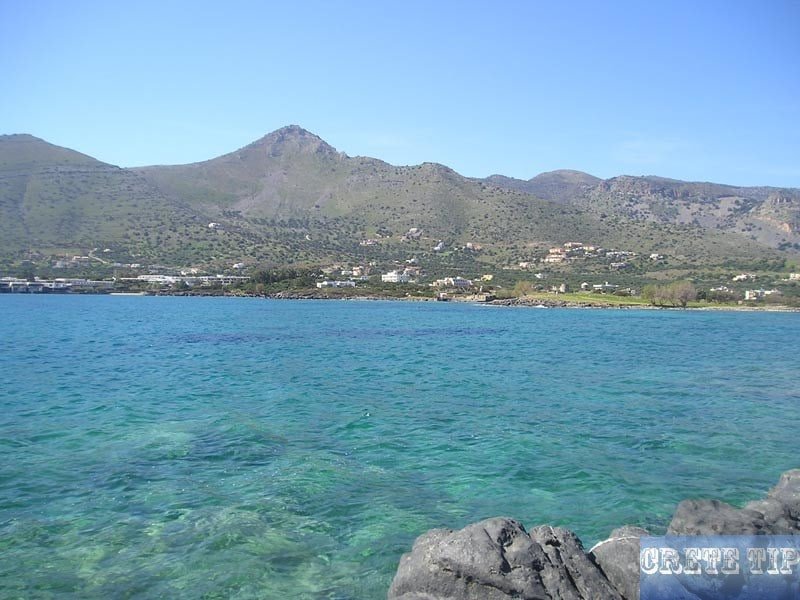 Olous, the sunken ancient city near Elounda. History, deities and the say of Britomartis, sunken in the sea and today remains like the old basilica.…