Old Panayia Kera church at Kritsa with the most complete and most famous palette of Byzantine frescoes preserved in Crete.

The most famous church near the ‘largest village’ on Crete, which became famous through the film adaptation of Nikos Kazantzakis novel ‘Greek Passion’.

The ‘traditional’ village of Kritsa, 5.6 miles (9 kilometers) from Aghios Nikolaos towards the mountains around the Lasithi Plateau, is a popular destination for tour buses and day tourists.

Despite the commercialization of the ‘largest village of Crete’, which has been in place for quite some time now, it is well worth a visit, not only to avoid the crowds of people on the coast at Aghios Nikolaos during the summer months. From the bus station in the city, buses run regularly to Kritsa.

By rental car you drive from Agios Nikolaos about 1 miles (1.7 kilometers) towards the big intersection with the highway. To the left you go to Ierapetra and Sitia, to the right to Elounda and Heraklion and directly straight ahead at the big Lidl supermarket to Kritsa, which is 5.5 miles (9 kilometers) away.

0.6 miles (1 kilometer) before Kritsa on the right side at the place Logari is the old Byzantine church Panayia Kera. Kritsa itself has become known worldwide through Jules Dassin’s movie shooting of Nikos Kazantaki’s novel Greek Passion with locals as actors and has since been considered a typical, traditional Cretan village.
Of course, it hasn’t been for a long time, but the magnificent panoramic location on a terrace of the Lasithi Mountains overlooking the Gulf of Mirabello is still magnificent, especially from the nearby ancient Dorian mountain city of Lato. Due to mass tourism the ‘showcase village’ has lost its original appearance, but especially in the evening it is still contemplative. 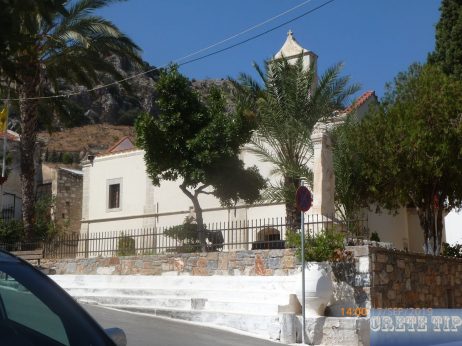 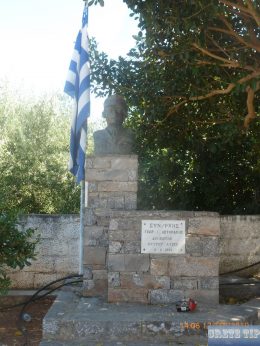 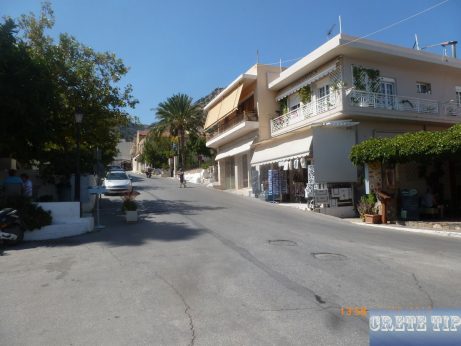 The Panayia Kera church is a three-aisled and dome-shaped church, with fantastic Byzantine frescoes. It is located along the road from Aghios Nikolaos about 0.5 miles (0.8 km) before Kritsa. The excursion is then also very practical with the adjoining, ancient Doric mountain town of Lato.

The church was constructed in three sections and the present center nave with the dome hall was built in the 12th century. The construction of the dome is unique in Crete since it clearly shows the Venetian influence.

On the other hand, the southern nave, consecrated to Saint Anna, as well as the northern nave, which is dedicated to Antonios, are covered with barrels of single-chambered chapels.

Within the beautiful church of Panayia Kera is perhaps the most complete and certainly the most famous palette of Byzantine frescoes preserved in Crete.
They are originally from the 14th and early 15th century. But since all were so often re-painted and reworked, it is impossible to accurately date them.

(589)
£20.98
✔ 𝐎𝐧𝐞 𝐁𝐚𝐠 𝐇𝐨𝐥𝐝𝐬 𝐀𝐥𝐥. Eono by Amazon – Travel Duffle Bag has a large 90 Liters capacity, which is enough to pack all the essentials on the go! - 2 - 3 stacks of change clothes, 2 pairs of trainers, several books, blankets, towels, sleeping bag, cosmet... read more
(as of June 24, 2022 20:37 GMT +03:00 - More infoProduct prices and availability are accurate as of the date/time indicated and are subject to change. Any price and availability information displayed on [relevant Amazon Site(s), as applicable] at the time of purchase will apply to the purchase of this product.)

(2825)
£10.99 £9.99
✅ DURABLE & WATERPROOF - Solid straps bear the weight more than 45 pounds, together with smooth metal zippers, no need to worry any ripping or break during trips. Made of waterproof and thick fabric to protect your gears well from rain or wet. ✅ PERF... read more
(as of June 24, 2022 20:37 GMT +03:00 - More infoProduct prices and availability are accurate as of the date/time indicated and are subject to change. Any price and availability information displayed on [relevant Amazon Site(s), as applicable] at the time of purchase will apply to the purchase of this product.)

(5594)
£3.30 £0.98
Removes 99.99% of bacteria, viruses and fungi which can lead to bad and unpleasant odours Hygienically cleans deep inside your washing machine, leaving a fresh lemon fragrance Removes unpleasant odours caused by detergent residues, washing at low tem... read more
(as of June 24, 2022 20:20 GMT +03:00 - More infoProduct prices and availability are accurate as of the date/time indicated and are subject to change. Any price and availability information displayed on [relevant Amazon Site(s), as applicable] at the time of purchase will apply to the purchase of this product.)

The frescoes at the southern entrance, through which one enters the Panayia Kera Church, show the life of Anne, the mother of Mary: her marriage and the birth of Mary, as well as the early life of the Virgin herself until her journey to Bethlehem.
The wall to the central nave is decorated with a long series of pictures with saints.

In the center of the church is the central nave, which is the oldest part. The frescoes originally date back to the 13th century. The story of Mary is continued and there are scenes from the life of Christ, including the birth of Christ, Paradise, the banquet of Herod, and an excellent representation of the Lord’s Last Supper. In the vault of the altar room, the Ascension of Christ as well as the Mother of God, the proclamation and the church fathers are depicted.

Near the main portal in the west are Saint Helena and her son, the Byzantine Emperor Constantine and the north-western pillar graces a portrait of Saint Francis of Assisi.

In the north side, there are quite fragmentary but lively scenes from the resurrection and the Last Judgment, together with the joys of paradise and chronological excerpts from the life of the saints (especially Saint Anthony). There is also a picture of an unknown saint in Cretan nationality clothes.

In the course of time, the large scenes were portrayed with small portraits of saints and apostles. 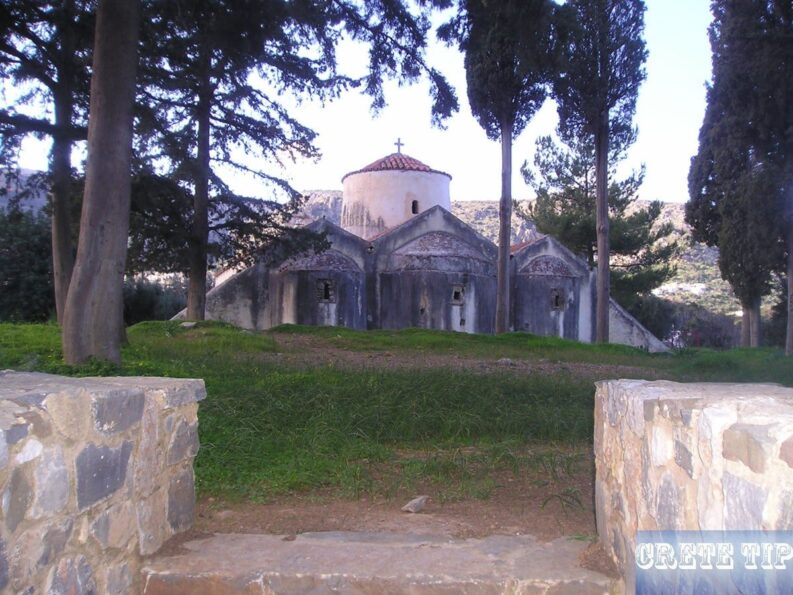 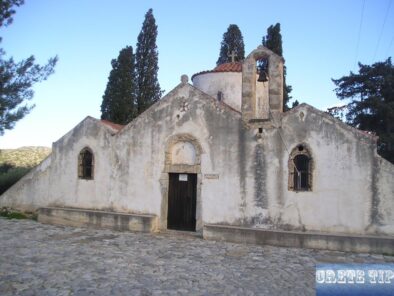 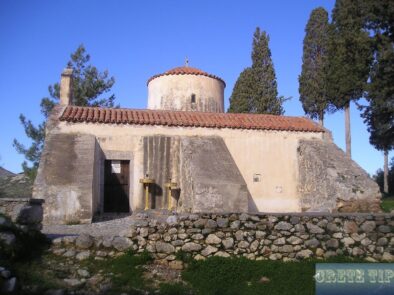 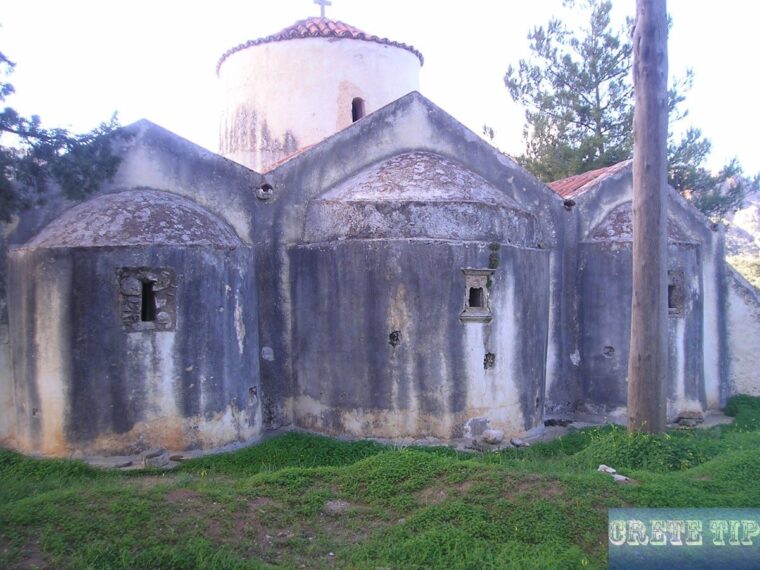 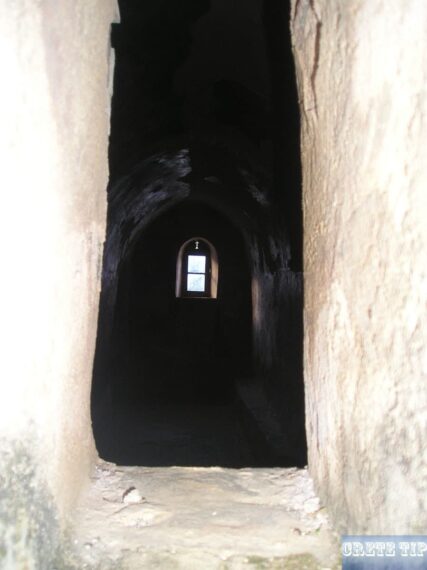 Within the church it is quite dark.

Opening hours during the season: Tuesday to Sunday from 9 am to 4 pm, admission 3 Euros in the past. For an extra fee you can often have the frescoes explained by a guide.

Photos can not be made in the interior unfortunately and it’s a good idea to have flashlight ready to illuminate the frescoes and also the rather uneven ground during the visit. 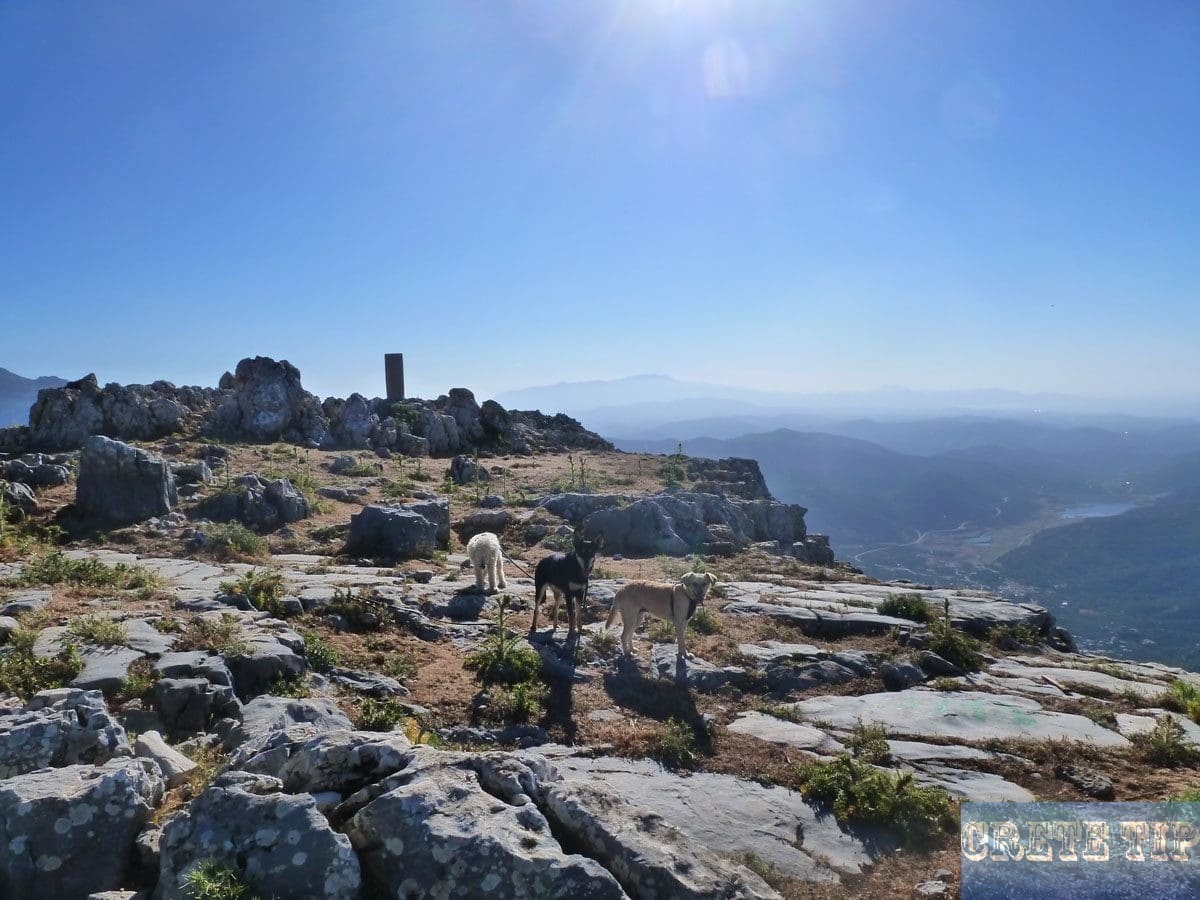