One of the most impressive gorges on Crete is the Kritsa Canyon close to Aghios Nikolaos.
Hiking and climbing over rocks is often necessary.

The circular route is one and a half hours long, but can also be doubled with a small detour. Often you can also meet other hikers here and hundreds of stone men live in the gravelly canyon bed.

From Aghios Nikolaos, the best way to reach Kritsa Gorge is from the southern edge of the city, at the large junction where the new expressway to Ierapetra branches off. But here you go straight to Kritsa, 5 1/2 miles (9 kilometres) away. At the entrance of the village there is a roundabout that one leaves to the right in the direction of the ruined city Lato. Two hundred meters after the town sign at the end of Kritsa, after a bridge, turn left on a dirt road marked ‘Gorge’. This leads directly to the entrance of the gorge and after 300 meters you can park your car.

Kritsa can also be reached by bus from Aghios Nikolaos and it is a 15-minute walk from the bus stop to the ravine.
In Kritsa itself there is the most important Byzantine church on Crete, the Panayia Kera. There are also numerous shops and restaurants.

The difference in altitude within the Kritsa Gorge is up to 150 meters, and climbing over rocks is often necessary. Since the stones in the river bed have been washed out and kicked smooth by many hikers, it is advisable to put on good shoes with a good grip sole. The way back is completely easy on agricultural roads.

From the place where the car was parked, you walk down the path on the left and shortly after that at a metal gate again down to the left through an olive grove terrace into the canyon bed. Follow the path into the gorge over stones washed by the water.
On the way there is a large boulder in the path, which can be crossed on the right side with the help of metal brackets. Shortly after, a carob tree stands in the middle of the gorge. 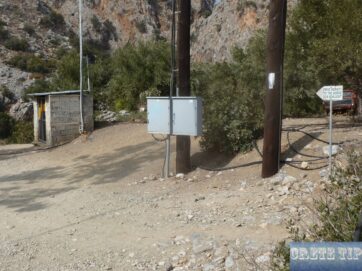 Here we go down from the place at the power pole in the olive grove to the Kritsa gorge. 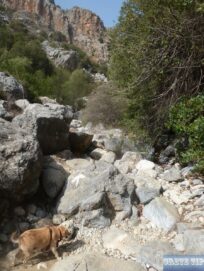 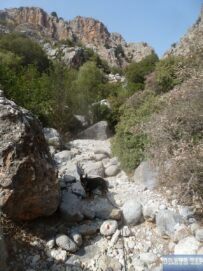 Always follow the red markings on the stones within the Kritsa Gorge. 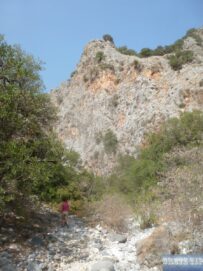 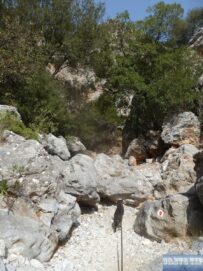 Obstacles are best overcome at the red marked points. 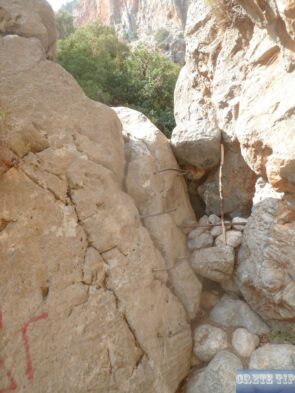 This is the boulder, which one overcomes over the hammered in metal brackets. 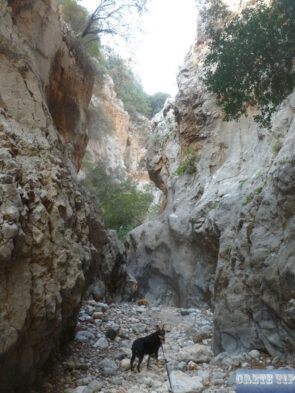 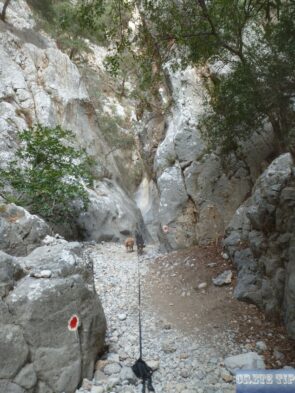 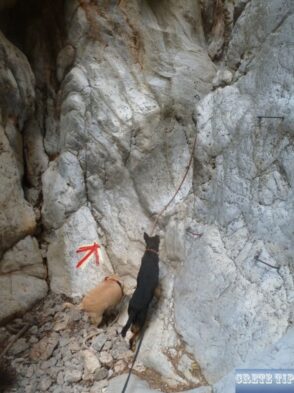 The most difficult part is this washed-out channel, which can only be climbed with the help of the rope. 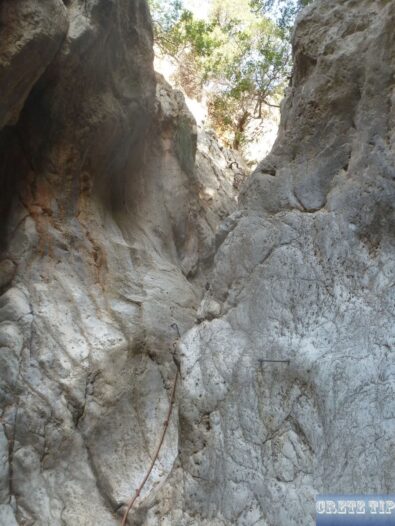 Here you have to pull yourself up with the feets on the stones by the rope. 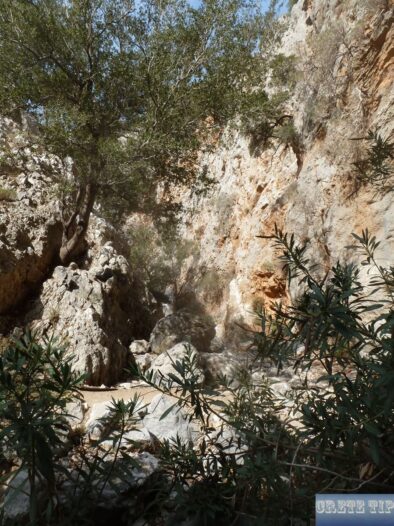 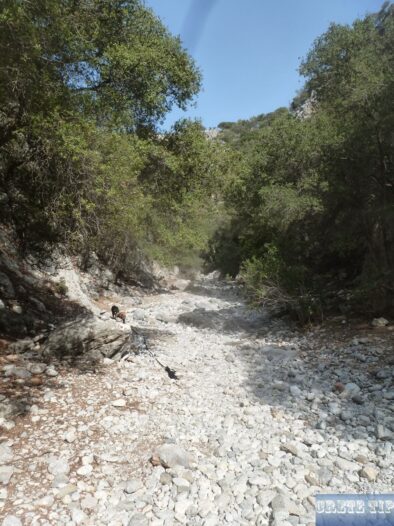 Then there are fascinating narrow passages in the gorge, where the cliffs, which rise up to 150 meters high, leave only a narrow passage. A washed-out spot, which already looks like a pipe, can again be overcome with the help of two metal brackets and a rope.
After that some boulders have fallen into the gorge and further boulders of rocks and washed out steep places can be bypassed, where arrows mark the right path.

Now the Kritsa Canyon is a bit wider and an old fence can easily be crossed because it has already been torn down. After about half an hour after the washed out pipe, you reach the exit of the gorge, which is indicated by a sign with the inscription ‘Exit’.
This was the most fascinating part of the hike. Now it is possible to double the hike to three hours by going straight on towards Tapes.

On the usual route, however, one leaves the bed of the canyon on the right on a path marked by a stone man. Immediately afterwards there is a square foundation of wooden blocks on the side of the path, which widens into a gravel path with holm oaks and bushes on its sides. After climbing up the path, another path from the left meets it and after another 5 minutes you reach a gravel road that crosses it.

Follow the gravel road to the right and after another five minutes the gravel road leads to the left. Attention – don’t miss it: Here you don’t follow it any further, but continue straight ahead on an old mule track, which after a short time is surrounded by walls of boulders. From here you have a beautiful view over the wide valley with its olive trees below Kritsa.

A gate follows and the path descends and meets a dirt road that should lead directly through an olive grove back to the parked car.

(548)
£5.99
❤️ 1-2 DAYS DELIVERY FROM UK! ❤️ Material: Polyurethane ❤️ Washable and Reusable ❤️6 PCs with High Quality and more Confort ❤️BLACK - 6PCS
(as of November 24, 2020 - More infoProduct prices and availability are accurate as of the date/time indicated and are subject to change. Any price and availability information displayed on [relevant Amazon Site(s), as applicable] at the time of purchase will apply to the purchase of this product.)

(1315)
£129.00
Exclusive to Ring Video Doorbell 3 Plus, get 4 extra seconds of black and white video to show you what happened before motion was triggered with Pre-Roll. An upgrade from the original Ring Video Doorbell 2, enjoy improved motion detection and dual-ba... read more
(as of November 24, 2020 - More infoProduct prices and availability are accurate as of the date/time indicated and are subject to change. Any price and availability information displayed on [relevant Amazon Site(s), as applicable] at the time of purchase will apply to the purchase of this product.)

(30216)
£20.00
Gift Card is affixed inside a blank greeting card with a separate mailing envelope A personalised gift note can be delivered with the item, which will be printed on the packing slip (not inside the greeting card). Once you have added the item to your... read more
(as of November 26, 2020 - More infoProduct prices and availability are accurate as of the date/time indicated and are subject to change. Any price and availability information displayed on [relevant Amazon Site(s), as applicable] at the time of purchase will apply to the purchase of this product.)