Malia stands on Crete for sun, beach, quad bikes and parties all night.
Old town, beaches, Overview and orientation and hotels at Malia and Stalis.

Malia is possibly the most crippled place on Crete and is often considered to be brash, businesslike and with wild stories about the nightlife. The beach, long and sandy as it is, is sometimes grotesquely crowded.

After these prejudices are listed, however, it can also be a great place for the holiday, as long as you are willing to adapt to the course of things, i.e. party throughout the night and sleeping during the day.
In addition, the extra of a traditional village that existed before the arrival of the first tourists and the fabulous Minoan Palace of Malia straight down the road as well as with various, beautiful sandy beaches.

On the ‘Beach Road’ the two villages of Malia and Stalis practically grew together and hotel ranks to hotel, so you will have the impression, it is practically a single village.

Beaches stretch in both directions from Malia. If you are ready to walk a bit or ride a bike, quad bike or rental car, you will be rewarded with better sandy beaches with fewer visitors, although total solitude will remain a dream. If you prefer solitude or at least some places with fewer tourists, you should look for more remote places like Zakros!

The central beach of Malia is directly from the center in the direction of the sea, but in high season one must be lucky enough to find a suitable place between the human masses.

At the eastern end of the beach is a small church, surrounded by dunes and marshy spots and frogs. There you can swim to a tiny island just off the coast.

However, you should wear bathing or swimming shoes, as the rocks are too sharp here to explore the island easy. A white chapel (unfortunately always locked) with surrounding water basins in the rocks with many crabs, shells and sea urchins on the sea-side of the island is waiting for you as a reward.

There are also beaches west of Malia, but the tempting places are in the east: the ‘Sun Beach’, about 1.5 miles (2.41 km) from the center, where there are free trampolines and pools to use as well a wide selection of sun beds, drinks, water sports and other entertainment.

Then followed the recommended Tropical Beach of Malia with even more beach chairs, but less disturbing tourist boats and parascenders.
And finally, Potamos arrives at the mouth of a small river near the palace with sun beds and a cafe.

What should be considered in any case: as the beaches of Malia are practically at the open sea, swimming is hardly possible as soon as the wind speeds reach 12 miles (ca. 20 km) per hour – which is not a rare occurrence with the mostly prevailing northwest winds.
For those who want a lot of swimming, they should visit protected bays – like in Elounda – where practical almost every day swimming and many other water sports are possible.

Malia consists of two separate parts, located on the opposite sides of the old national road (Venizelou). The heart of the tourist life is in the north in the direction of the beach, where two main roads wind themselves for more than a half mile towards the sea. 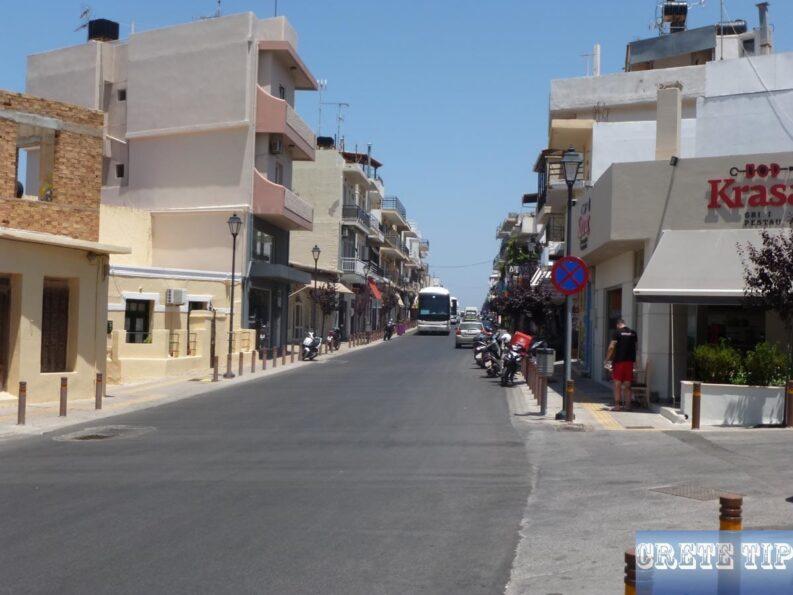 Tthe old national road (Venizelou) from west to east in the center if Malia. 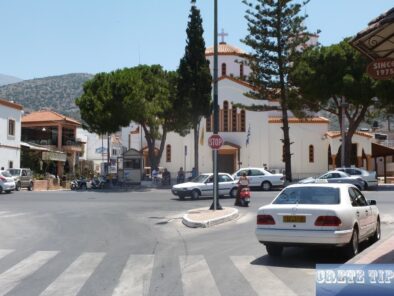 The large crossroads at the church

A typical Malia image on the ‘Beach Road’ at the beginning of tourist season. 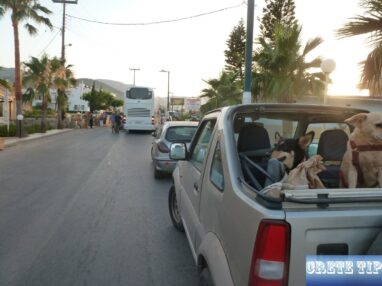 A coach unloads hotel guests on the ‘Beach Road’ of Malia. 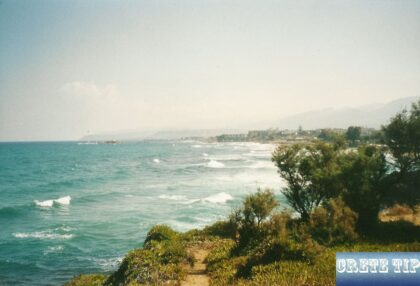 The coastline of Malia from the western end at Stalis. On the left you can see the small island. 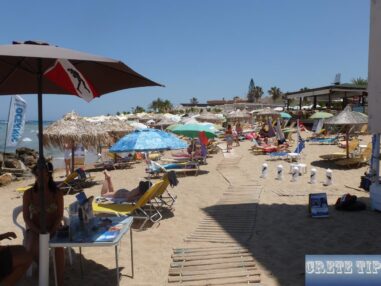 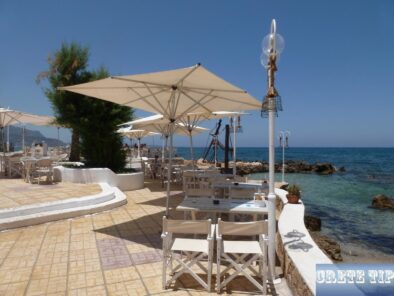 Close to the central breach 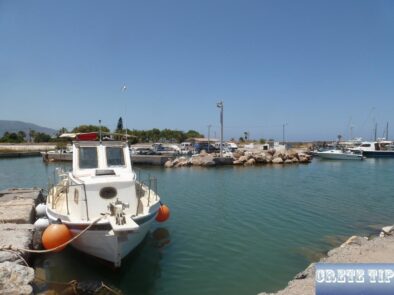 At the port of Malia, where also some fish tavernas are located. 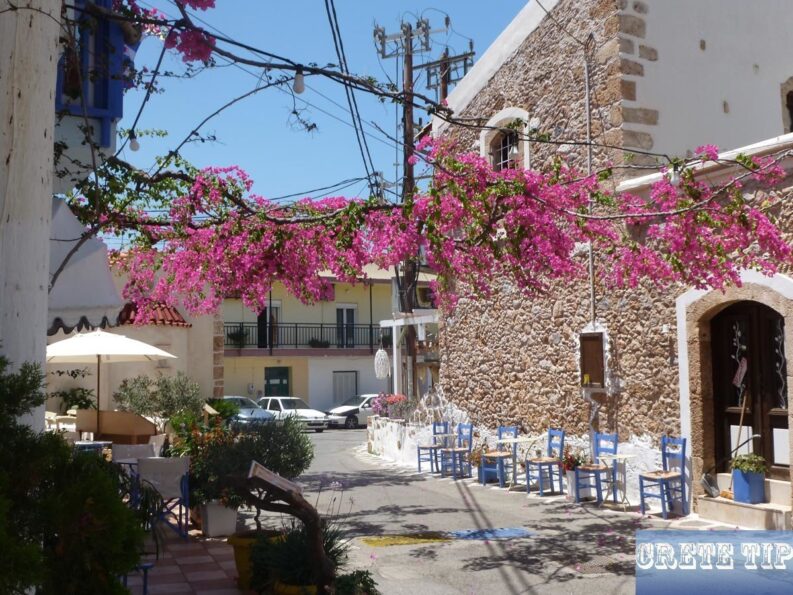 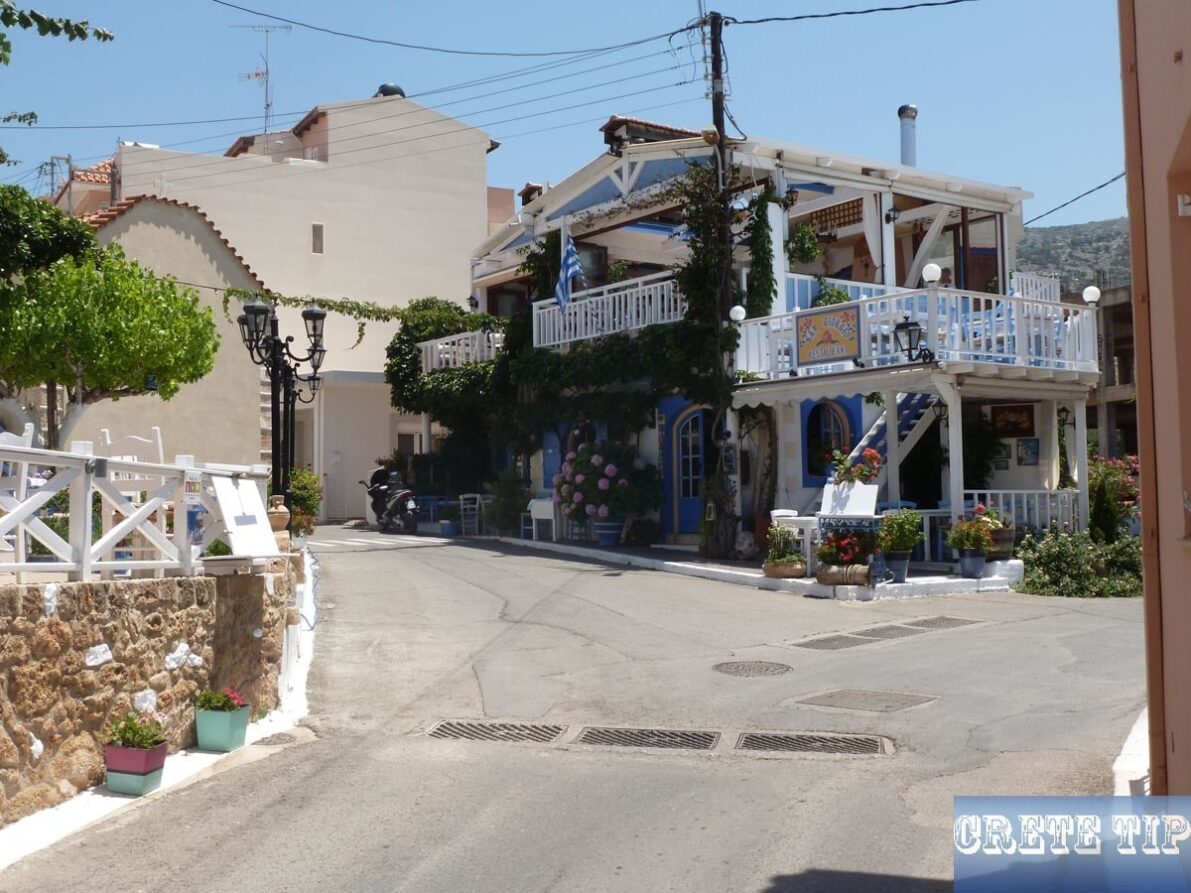 One – Zahariadhi – from the large crossroads at the church at the western end of the actual Malia, the other – Dhimokratias – a little further towards the east. After about 300 yards (ca. 274 m), the two streets meet each other and lead as a single street along in front of supermarkets, souvenir shops, travel agencies, cafes, restaurants, bars, video shops, discotheques, night clubs as well as a McDonald’s restaurant to the sea. At the end there is a car park, a small port and access to the beach.

It takes you about 15 minutes to walk, if you stay away from the many shopping opportunities and amusement – or it is at midnight when it is busiest.

As mentioned at the beginning, the village on Beach Road is actually two: Stalis and Malia, which have become unrecognizable and inseparable merged into a single, large tourist center.

South of the main street, on the other hand, is the traditional old town with its narrow, winding streets and whitewashed houses and walls. Here you can still find traces of the traditional Malia, next to a large supermarket, taverns and pensions.

Hotels in and around Malia

Overview of currently available hotels in and around Malia at the best price!

(506310)
£5.50
Up to 98 MB/s transfer speeds. Storage temperature :-40ºC to 85ºC Load apps faster with A1 performance class UHS speed class U1 and speed class 10 for Full HD video recording and playback Compatible with microSDHC and microSDXC supporting host device... read more
(as of November 25, 2020 - More infoProduct prices and availability are accurate as of the date/time indicated and are subject to change. Any price and availability information displayed on [relevant Amazon Site(s), as applicable] at the time of purchase will apply to the purchase of this product.)

(4900)
£11.85 (as of n/a - More infoProduct prices and availability are accurate as of the date/time indicated and are subject to change. Any price and availability information displayed on [relevant Amazon Site(s), as applicable] at the time of purchase will apply to the purchase of this product.)

(2219)
£44.99
4K Ultra HD Action Camera - Professional 4K/30fps video and 20MP image, your Cross tour action camera can capture every detail of your wonderful outdoor adventures and present an immersive footage of you and your world. External Microphone & Remote C... read more
(as of November 26, 2020 - More infoProduct prices and availability are accurate as of the date/time indicated and are subject to change. Any price and availability information displayed on [relevant Amazon Site(s), as applicable] at the time of purchase will apply to the purchase of this product.)